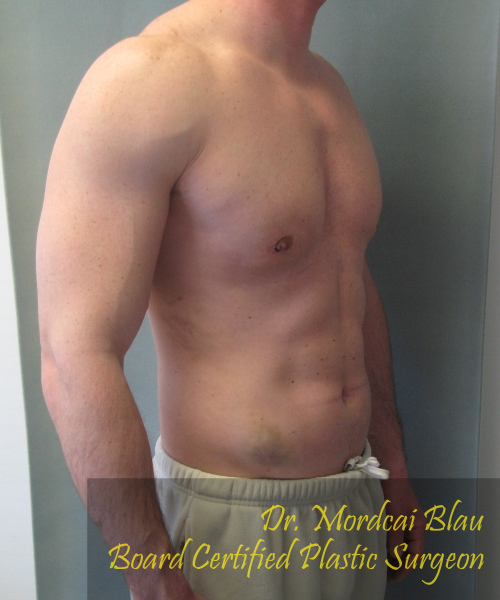 This is a 25 year old male from Bergen County, NJ, who is 6’3 and 205 lbs. Despite his excellent physical health and physique, he had been suffering from a condition called Gynecomastia, which is caused by the formation of glandular tissue located on top of the muscles in the chest, resulting in an enlargement of the breasts. The patient became frustrated with his appearance because he had been working so hard to achieve a muscular form. He decided to consult with Dr. Mordcai Blau, board certified plastic surgeon and a diplomate of the American Society of Plastic Surgeons. He was impressed to learn that Dr. Blau has a superlative reputation worldwide as the leading authority in Gynecomastia surgery and has even developed his own surgical method for the correction of the condition called the “Natural Blend Technique.” The surgical procedure involved the excision of the glandular tissue. Due to the low percentage of body fat in the patient, liposuction was not required. The patient was thrilled with the successful outcome and is enjoying his improved physique.